Events that we know of:  Helicopter flying around a building near Provenza for about 8 minutes.  Suddenly a burst of gunshots rang out… the shots lasted about 4 minutes.  Witnesses state there were 4-6 different guns used based on the sound.  This story is breaking news and will update as we know more information.

Witnesses states at least 2 of the weapons were automatic weapons such as assault rifles. 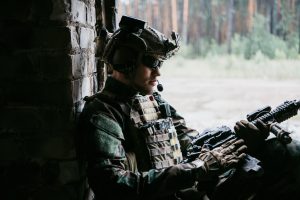 Weapon military while waiting on a spot. Military man checks his assault rifle preparing for

To state the least everyone including all foreigners may want to consider staying inside their homes till further notice.   Stay on high alert if in the Provenza area / Parque Lleras area.

Coming To Colombia? Get a Visa!
Colombian Women Jul 22